HOW TO BECOME A SPACE ARCHITECT

What is the scope of Space Architecture? How is the field of space architecture related to terrestrial architecture and to design for extreme environments?

The active participation of architects and industrial designers in the aerospace industry began in the 1960s. In the USSR, the studio of Vladimir Chelomei designed the Salyut 1 space station, which launched in 1971. In the USA in 1968, industrial designer Raymond Loewy persuaded NASA to include a window in the Skylab space station so that astronauts could see out and observe the Earth; Skylab launched in 1973.

The beginning of human space flight was dominated by engineers proving out the necessary transportation and life support systems, but it did not take long for architects to envision their role in designing space stations and planetary bases. NASA relied on their crew systems division for capsule design and in the early 1970s, a few architecture students expanded the scope defending graduate theses on space station concepts. Toward the end of the decade, NASA’s interest in building a space station exposed the need for architectural-level thinking. This cracked the door for aerospace support contractors to consider hiring an architect. Later, the Space Station Freedom program further opened the door including architects within NASA, the broader contractor community, and academia working together in the emerging field called Space Architecture.

Today, a growing international community of architects and industrial designers is at work across the space field. They are involved in all areas of space projects and mission development including robotic rover and probe design, lunar and Mars base design, launch facilities planning and construction, mission payload definition and management, underwater and simulated microgravity testing, systems engineering, space mission control support, and extreme Earth environment habitat design and construction. Fundamentally, space architecture is an extension of Earth architecture. Earth is a celestial body in space; so is Mars; so is the Moon. Space architecture beyond Earth differs from terrestrial architecture by extreme environmental conditions: high radiation, low (or no) atmospheric pressure, low (or no) apparent gravity, and large temperature variations, to name just a few. Nevertheless, the goal is still the same: to provide a shelter that protects and supports good quality of life for the inhabitants. With the attitude of an architect, the task is to learn everything you can about the environment you’re designing for – whether on or off the Earth – and learn the techniques for dealing with the extremes.

One of the biggest challenges that space architecture faces is lack of established infrastructure such as: power and water supply, sewage and waste recycling and transportation support. Once you learn how to design structures for harsh and unforgiving environments of space you will become aware of possibilities that Space Architecture offers for Earth applications and how it can contribute to sustainable developments right now… A new Space Architecture subcommittee (Terrestrial Applications) was formed in 2014 to explore and promote terrestrial applications of space architecture with particular focus on sustainable development.

So don’t miss this opportunity to become a part of the space architecture community to improve living on “Spaceship Earth”.

Where should I start? What background can help in pursuing a Space Architecture career? What about future employment?

Space Architecture is still an emerging discipline. Employment opportunities depend on governmental support of space exploration programs and commercial initiatives in the field that are still limited. The best attitude is to prepare yourself technically, and follow the news and developments to seize opportunities when and where they arise.

Some traditional architecture, engineering, and construction (AEC) firms have developed concept art for large-scale space development. Their dreams may still be decades away from realization.

Currently, most space architecture is conducted by governmental space agencies and major aerospace contractors. The “New Space” economy is bringing opportunities to more aerospace startups. All of these are dominated by aerospace engineers. A space architect shall have broad general knowledge of the field, she must be prepared to speak ‘their’ language and demonstrate an ability to contribute to a technical design team.

What educational opportunities are available for becoming a Space Architect?

SICSA: The Sasakawa International Center for Space Architecture (SICSA) is a research and design organization within the University of Houston. SICSA is among the academic leaders in the field of space architecture and is also active in planning and design of facilities for extreme environments on Earth.

MBA Space Architecture: The TU Wien Academy for Continuing Education is is offering the Executive MBA Space Architecture Program which prepares executives, high potentials and those interested in the space market for future requirements in an international and interdisciplinary field of work in space and above all on Earth. The programm is part-time, blocked in modules, and offers 90 ECTS. Courses are taught by top leaders and experts in the diverse fields in the space sector. People from all backgrounds who want to combine science, technology and a sound business education are welcome.

AIAA: In this course you will learn about the development strategies and design challenges of locating and building lunar habitats. Space Architects will present material on how the transportation system, site selection, and environmental factors influence the shape, size, and growth of lunar bases. This unique course is at the leading edge of system-design-integration for human lunar missions.

Other Courses, Programs, and Syllabi

ISU: International Space University provides graduate-level training to the future leaders of the emerging global space community at its Central Campus in Strasbourg, France, and at locations around the world.

NASA Academy for Astrobiology: This unique center of higher learning promotes awareness of the multi-faceted prospects of science and the potential of astrobiology.

UND Aerospace: the John D. Odegard School Of Aerospace Sciences at the University of North Dakota is a world-renowned center for aerospace learning, nationally acclaimed for our achievements in collegiate aviation education, atmospheric research, space studies, and computer science applications.

Do I have to have a professional degree in architecture or aerospace engineering?Which post-graduate programs are available?

Space Architecture is an emerging discipline. For most of the current practitioners it is a self- made, self-directed career path. You must be well motivated and have a tutor or a team that suits you and your interests.

Among the members of SpaceArchitect.org, most have “regular” professional degrees in architecture (B.Arch or M.Arch.) or industrial design. Beyond that, a Space Architect needs to become familiar with all topics related to human space exploration.

Download the PDF brochure about the education and opportunities here: 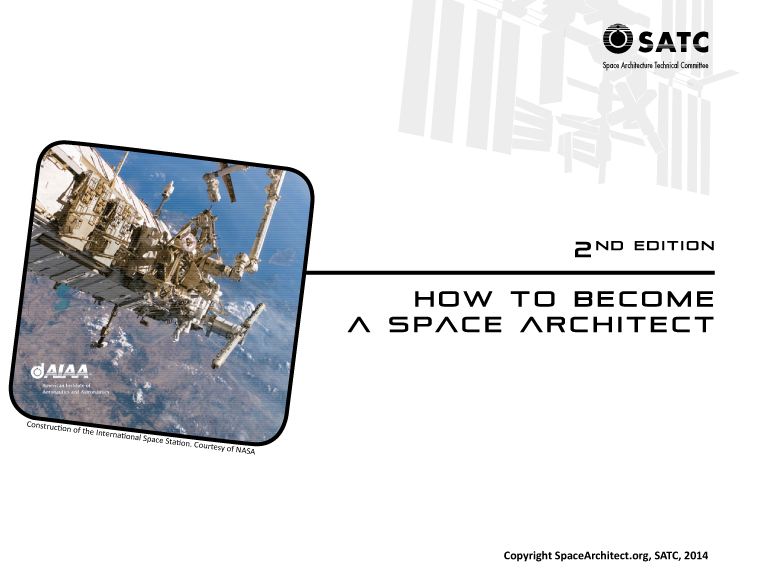